It's a little late for a retrospective post, but here goes. 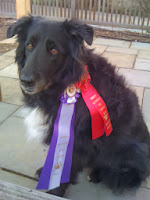 The achievement prize goes to Katie, who earned her Rally Level 1 title along with an Award of Excellence (for high scores).  Katie is a terrific Rally partner--cool as a cucumber under pressure.  One look at her happy face, and I smile back and remember the whole point is that we're having a good time together.

Arlo's 2013 achievements don't involve ribbons, but are no less significant.   He and I have been developing as a team, and I'm so proud of his efforts.  In the past year we've improved just about all of our Rally skills, learned the beginnings of "go out" and a formal retrieve.  But Arlo's biggest accomplishment may be his improved behavior around other dogs.  Thanks to hard work on both our parts, rather than acting out (lunging, barking), he now lets me know whether he'd like to greet or ignore other dogs when we're out walking.  He's still tentative in inside spaces, but we're working it out.

And, finally, a BIG shout out to the wonderful dogs and their excellent humans from the Third St. Family Dog Training Program who earned CGCs and TDIs.  WTG!

Katie celebrated her 11th birthday on March 20, and Arlo celebrated his second adoptaversary on June 5. 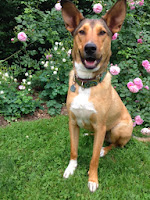 A less celebratory milestone was saying goodbye to The Dog Course, which had its final run last spring with a truly fabulous group of Lafayette students.  Highlights included a trip to the Lakota Wolf preserve, the annual Campus Dog Show, and a new assignment, based on an essay by Alexandra Horowitz, in which students followed one of my dogs around a block on College Hill and then wrote about what they learned from that experience about the canine umvelt.  The Dog Course was part of Lafayette's Values and Science and Technology (VAST) program, which was eliminated from the new curriculum.  I plan to offer a revised version of the course as a First Year Seminar, but I am very sorry I will no longer be teaching it as a VAST course.  VAST was a unique feature of Lafayette's curriculum, and it's a shame to see it go.

Arlo's better behavior around unfamiliar dogs meant that he made some new friends, including Franz, service-dog-in-training Eli, and some cool dogs at Four Paws Playground.

For the past couple of years, I've been part of a small group of trainers who meet about once a month to train, or watch a training video, or just socialize our dogs.  This year we attended a couple of really excellent workshops together (BAT with Grisha Stewart, and The Human Half of Dog Training with Rise van Fleet).  We also decided to try Treibball, which is a newish sport where a dog, with the help of directions from a handler, herds giant balls into a net.  We took a workshop together in January and then more classes over the summer.  Treibball looks easy, but is actually pretty challenging because your dog has to be able to work away from you.  And, like most handlers, I have spent a LOT of time teaching Arlo to stay right beside me.  But because it's a challenging sport to train, it's also really satisfying when you see progress.  Here's Katie showing off her skills.


Finally, Arlo and I also did our part for dog science by contributing a video to the study on dog-human play at Alexandra Horowitz’s dog cognition lab.